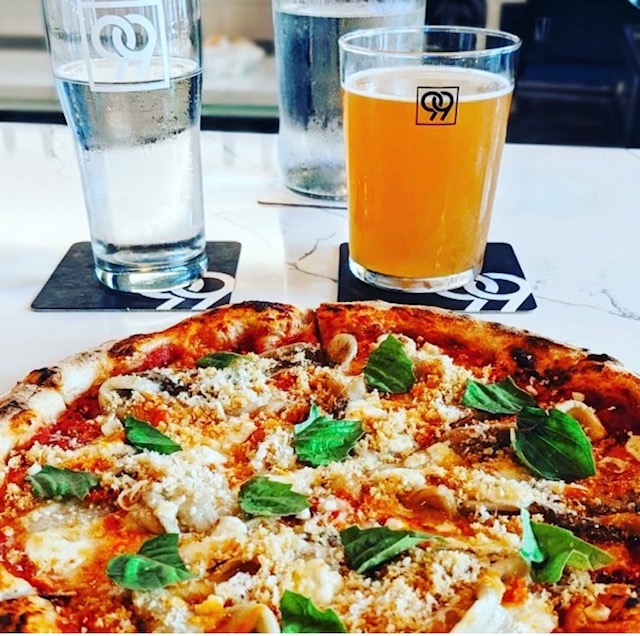 Was there ever a more perfect couple than pizza and beer?

Never was there a better match than pizza and beer. Beer’s ingredients were made to dance with pizza’s flavors because if pizza can dish out flavor, then beer has everything needed to make that flavor sing.

Classic cheese pizza?
Try a Belgian witbier like Allagash White or a helles lager like Huber Helles. Both of these beers are light on the palate and have refreshing carbonation to cleanse after every bite. Finally, both beers match well with the mild mozzarella cheese and doughy crust – the beers won’t overpower the flavor of the pizza and will add some light grain or sweet character to the food.

Pepperoni pizza?
Try an IPA like Maine Beer Company’s Lunch or a malty brown ale like Cigar City Brewing’s Maduro Brown Ale. Hoppy beer can stand up to the complex and meaty flavors of the pizza and add another layer of complexity to an otherwise layered meal. The malt in the brown ale is roasted just like the meat is cooked, so the malty sweetness joins forces with the food. In the same way, the hoppy bitterness of an IPA can contrast with the meat and add another type of flavor to the pizza.

Mushroom pizza?
Try a Belgian ale like Duvel or a golden ale like Gulfport Brewery + Eatery’s Gulfport Gold. ‘Shrooms have a lot of earthy flavors to them that pair well with the sweet malts and mild funkiness of a Belgian ale, especially one that drinks as easily as Duvel. If a spicy yeast strain
isn’t your thing, try a golden ale – the beer has similar malts and can provide a great balance to the earthy qualities of a mushroom pizza.

Meatball pizza?
Try a wheat beer like Paulaner Hefeweizen. Meatballs have plenty of fat, so we need a beer that is ready for some heavy lifting. A hefeweizen has lots of carbonation to cleanse the palate for a fresh taste with each bite in addition to plenty of wheat to lift up the pizza itself and carry the flavor combination to another level.

Hawaiian pizza?
No. Pineapple. On. A. Pizza.
We’re telling you that pizza and beer have an infinite number of flavorful combinations. We invite you to be skeptical, in fact we hope you don’t believe us. Come down to 99 Bottles on 2nd Street in Sarasota on Sunday or Monday when Tralia serves their Italian-inspired menu and try some of these combinations. We think these are the best, but come see for yourself.