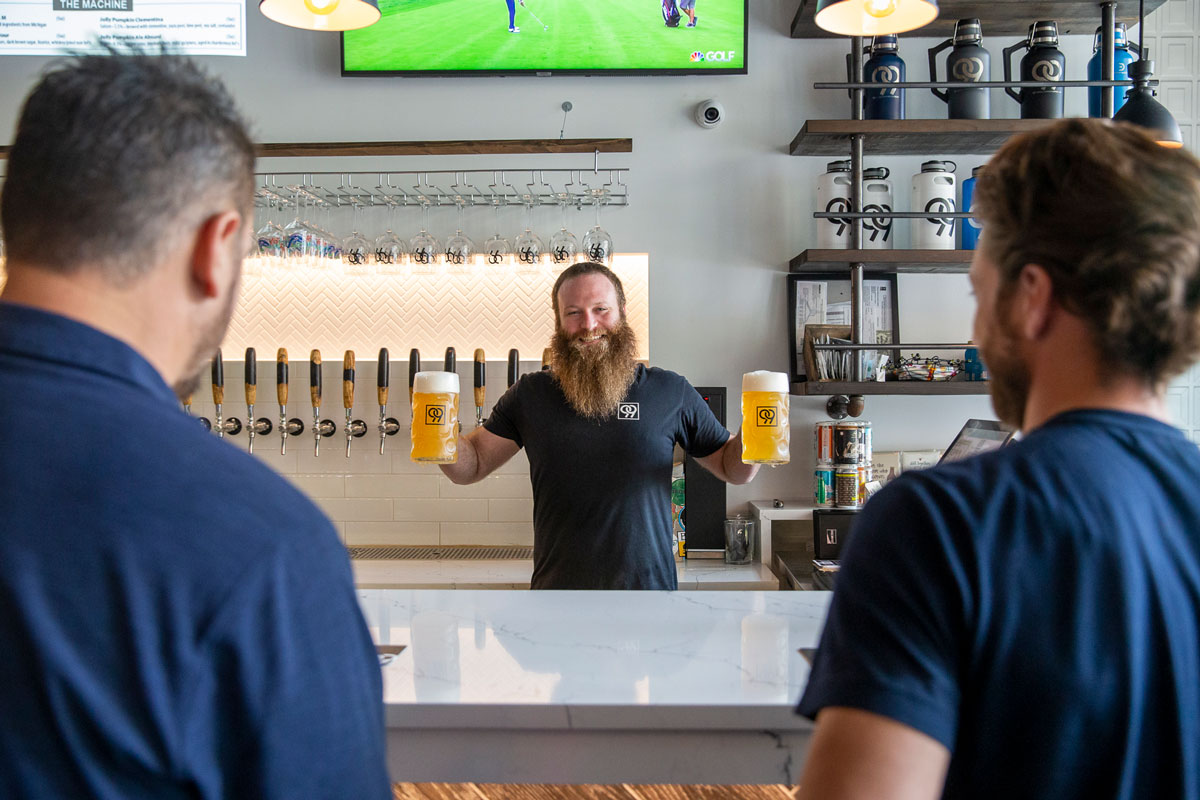 Mark Tuchman had a vision. Not a dreamy, mystic vision. His dream was quite specific. Craft beer was involved, naturally. (As you might expect from the former proprietor of the legendary Mr. Beery’s.) A carefully curated wine selection was also vital to the equation. But most of all, he wanted to create a welcoming gathering space for jovial lovers of new tastes, new friends and new experiences.

Sound vague? No worries. You can see exactly what Tuchman’s vision looks like when you step into 99 Bottles, a tap room and bottle shop conveniently located on the ground level of the new The DeSota apartment complex in downtown Sarasota across from Whole Foods.

This cozy space is artfully designed with an open, clean and urban vibe, accented with industrial and reclaimed elements. Behind the bar, there’s a gleaming row of 36 draft taps. At the bar’s far end, local artist and Ringling College of Art and Design graduate Will Ralston has painted the face of a jovial, bearded gentleman on the wall. Who is this guy?

“He’s the captain,” says Tuchman. “We like to think of him as an archetypal bar patron, the kind of guy you’d want to share a beer and chat about life with.”

Tuchman explains that the average customer is “anyone 21 and older who seeks to taste excellent liquids for affordable prices,” he says. “We attract hardcore craft beer fans, wine connoisseurs, and people who enjoy experiencing new tastes. The big thing here is choice. There’s no such thing here as too many choices.”

This upstart taproom boasts the aforementioned 36 beers on draft, including a rotating selection of 28 craft beers from around the world. “We love to highlight Florida breweries, especially the hyperlocal,” he says. “You’ll always find 10 or more regional drafts on tap.”

He also offers choice in size. Savvy beer connoisseurs can sample craft beer options in 5-ounce glasses, or they can commit to a full-sized pour appropriate for that beer style. For those who aren’t ready for commitment, one of those gleaming machines behind the bar can draw a 5-ounce pour from a 25-ounce bottle.

Beer buffs on the run have their own set of options. They can take home a traditional growler in a 64-ounce bottle. The slightly less thirsty can bring back a “crowler” in a 32-ounce can. (The bartender seals them up on-site with yet another clever gadget.) Bottles are for sale too, naturally.

And yes, there are, in fact, 99 bottles of beer on the wall. (Cans too.) The selection is also ever-evolving.

Tuchman’s candy store philosophy isn’t limited to beer — 99 Bottles also offers a rotating lineup of kombuchas and cold brew coffees on tap from Out and About Coffee.

Tuchman’s equally proud of the rainbow of cocktails. Although, strictly speaking, they’re not really cocktails because they’re not licensed to serve spirits. Tuchman substitutes with sherries, fortified wines and aperitifs. He calls the results a “cocktail experience.”

Edible choices also abound, including a mezze plate with spiced hummus, herbed yogurt and crudities, hearty bauernwurst on a roll with sautéed apples and onions, a cheese and charcuterie board and whoopee pies filled with marshmallows.

There are 28 wines also available by glass in a spectrum of white, red, rosé and bubbly.

“Our wine selection is carefully curated and always changing,” Tuchman says. “You won’t see the usual suspects from the big box stores.” And if you’re just plain thirsty, their reverse osmosis machine keeps the water ridiculously pure and cold.

Tuchman loves the cutting-edge technology. But he sees it as a means to an end.

“It’s all about creating experiences,” he says. “I’m in the people business, not the beer and wine business.”

He likes to think big. But not so big that that he loses the human touch. 99 Bottles comfortably seats about 40 people. Maybe 65, at elbow-to-elbow private cocktail functions. It’s an intimate space. And that’s just the way Tuchman likes it.

“We’re lucky to be a small family firm,” he says. “We have a staff of eight, including my wife, Christine, and myself. We’re at the perfect size to experiment and still maintain a high standard. We’re in the perfect location — a stone’s throw from a public parking garage. Why improve on perfection?”

Tuchman and his wife have 15 years of experience in the craft beer and wine business, and he says because of that track record, they don’t want to compromise their vision. Instead, the couple strives to continually push the envelope.

“This business is hard work,” he says. “If you don’t love that work, you’re in the wrong business.”

Do they plan to teach this demanding business to their two young daughters?

“They’re already well experienced,” he says with a laugh. “When our daughters were 5 and 3, they sold Girl Scout Cookies in a previous business of ours. They did very well. If they’re still interested when they’re the appropriate age, we’d love to teach them.”