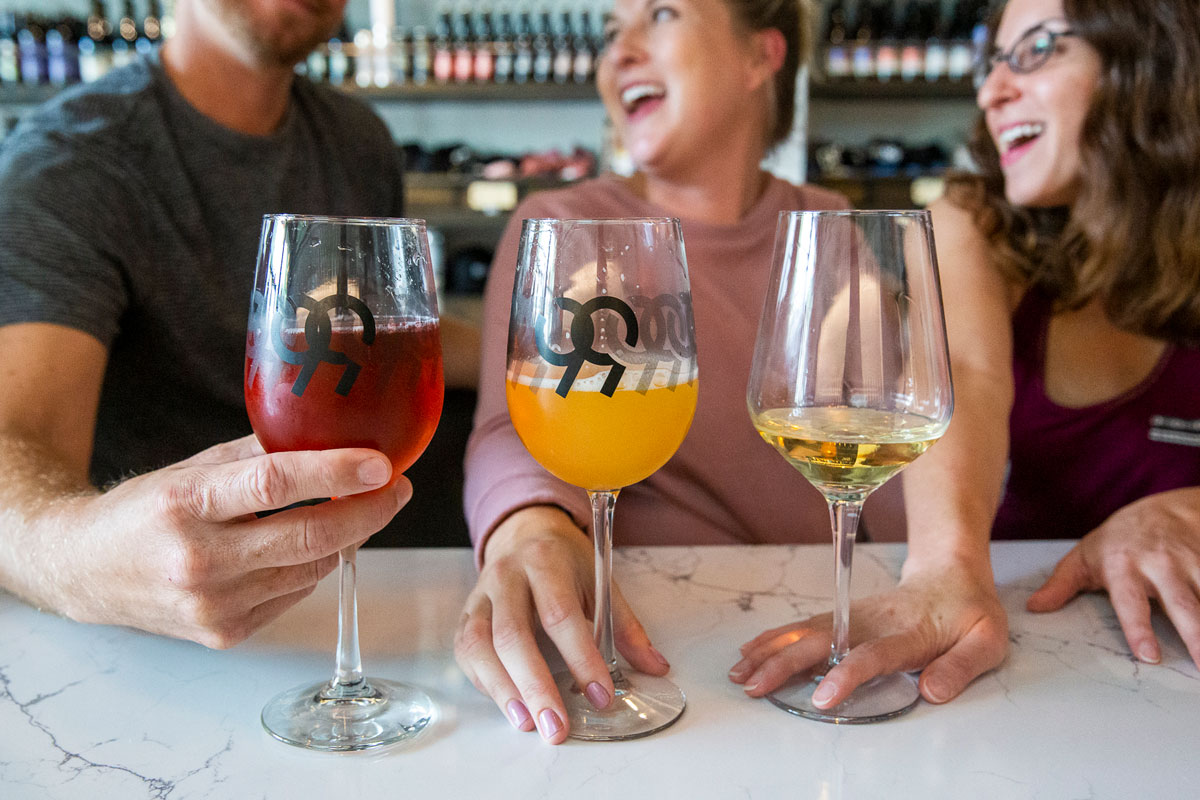 When craft beer and wine bar 99 Bottles opened in downtown Sarasota this April, it caused a lot of excitement in the community for a number of reasons.

Part of the anticipation was due to its owner Mark Tuchman, who formerly owned popular Sarasota craft beer bar Mr. Beery’s in Gulf Gate. There’s also its location, on the ground level of luxury apartment building The DeSota, where Tableseide Restaurant Group’s new bar Circo: A Taco and Bourbon Joint also plans to open.

I was personally most interested in the wide array of craft brews available not only on tap, but also to take home via a shelf of packaged beer, wine and other products. I briefly visited 99 Bottles while reporting its opening, but didn’t have much of a chance to take in the bar or its lengthy tap list.

So I figured it was time for another visit, particularly after I learned the beer list switches up and new weekly events have been added.

I stop in around 5 p.m. on a Friday. While the small, about 10-seat bar is already nearly full, it’s quiet and laid-back, with a crowd ranging from friends kicking off the weekend to a guy quietly working on his laptop.

The design is sleek and spare, with a white marble tabletop, slim overhanging lights and wooden beer taps sans their colorful handles. One eye-catching detail is a black-and-white mural by Sarasota artist Will Ralston of a smiling bearded man, looming above on a wall by the end of the bar.

Two flatscreen televisions hang above the bar along with a screen projection of the on-tap offerings. (That might seem like a small thing, but after recently visiting a bar where the draft beer list was only available via a small television that slowly rotated through multiple sections, it’s appreciated.)

There’s additional seating in lounge sofa sections at each corner by the entrance, and stools underneath the retail shelf. The wall features an extensive variety of six and four-packs, wine bottles, growlers and crowlers (which can be filled at the bar), glasses and apparel. Many sport 99 Bottles’ nifty logo, which is also printed on the bar’s glasses and painted on its doors.

99 Bottles features about 30 beers on tap, which change often. Recent offerings included local choices in Motorworks’ Cruiser Kolsch and Darwin Llama Mama Milk Stout on nitro, both from Bradenton, along with other American craft and a variety of German brews. It also offers $4 local canned beers, $5 hard ciders and uses a specialized tapping system to offer small pours from a rotating slate of rare bottled brews (prices vary).

It makes two wine-based cocktails, takes on an Aperol spritz and sangria. I go with “The Gria” ($8.50), made with red wine, orange juice and peach nectar, poured a thick purple into a slim glass.

There are also 28 red, white, sparkling and rose wines available. And if you don’t drink alcohol, cold brew and coffee tonic from Sarasota’s O & A Coffee & Supply is on tap, as is a CBD-infused kombucha from California.

Its happy hour runs until 7 p.m. daily and features a selection of $3-$4 beer cans, $5 draft and $5-$12 wines by the glass. I go with the Kapuziner Weisse on draft, a tasty German Hefeweizen with notes of banana and spices.

Food is served starting at 4 p.m. Monday-Friday and 8 a.m. Saturday-Sunday, with happy hour also including a few deals on bar bites such as a “lil’” cheese plate ($5) and popcorn ($3). I order a pretzel ($4), which pairs nicely with my German beer, with a side of genuinely spicy mustard a bonus.

Other snacks on its regular menu include artichoke dip with bagel chips and crostini with prosciutto, parmesan and basil. There’s also a full-size cheese and charcuterie board and mezze plate, and desserts including whoopie pies.

They’ve recently added a “Fernprost” German night starting at 4 p.m. Thursdays including liter steins of select beers as well as bauernwurst and Bavarian pretzels. And on Saturdays and Sundays from 8 a.m. to 2 p.m., they offer a New York bagel brunch.