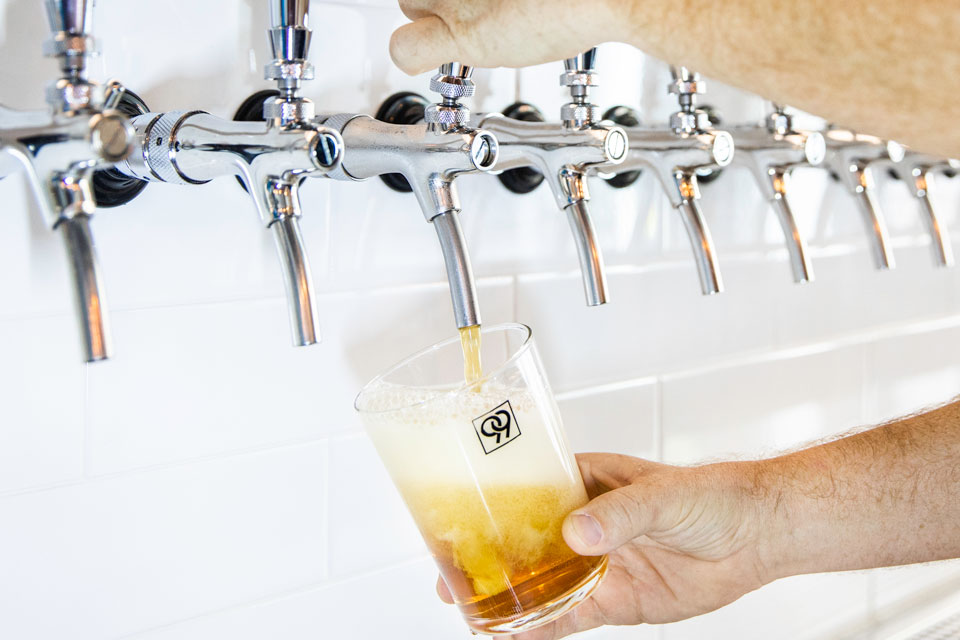 Upon the January 2010 opening of Mr. Beery’s, one of Sarasota’s first temples to craft brew, proprietor Mark Tuchman became a key player in the city’s rapid craft-consciousness evolution that has since seeped into cocktails, coffee, juice—just about anything you’d care to imbibe.

After nearly five years broadening local beer drinkers’ palates, he sold Mr. Beery’s to new ownership and, with his family, he embarked on a vision quest in “extraordinary liquids.” From New York and California’s hip and high-end dining destinations to North Carolina and Colorado’s most celebrated breweries and cutting-edge brewpub concepts, Mark and his wife, Christine, sought inspiration for the next phase of Sarasota’s craft beer evolution.

“Like many entrepreneurs, you seem to find inspiration elsewhere outside of the little bubble that you might live in,” Mark says. “We wanted to see what other people were doing and how. We looked for what seemed cool, exciting, unique, interesting—elements we would want to curate for a new space and for our potential customer base.”

This past spring, the Tuchmans’ vision crystallized into reality with the opening of 99 Bottles, a downtown hangout and decidedly urban “un-dive” that maintains the warmth and intimate vibe of a beloved neighborhood bar. Its 34 taps dedicated to beer stay in constant rotation as Mark sources unique, compelling, and exceptional suds from near and far.

“We always go back to beers or breweries that we love the most and our customers request of us,” Mark says. “But we do like to mix it up because that’s one of the fun parts about craft beer: There are thousands upon thousands of different beers available for the consumer today; why not go ahead and find the best of them all, and just make them available all the time?”

If you’re not a beer drinker, 99 Bottles takes the same curatorial approach to 30 wines by the glass, as well as cold-brew coffee and kombucha on tap. Feeling munchy? Christine has you covered with an exquisite array of gastropub bites. The crowd favorite, hands-down, are adorable jars of one-bite cookies served warm from the oven with a side of milk for dunking.

“Cooking and baking have always been a passion,” Christine says. “I grew up in a big Italian family—you know, very stereotypical— there was always something cooking in the kitchen, and I was always interested in it.” She designs 99 Bottles’ seasonal menus herself and perfected her recipes in the Tuchman family kitchen with friends and neighbors as (doubtless) eager test-testers.

While 99 Bottles’ mission is to procure the world’s rarest liquid treasures to share here at home, the bar proudly touts local love, and not just on tap. An impressive retail section stocks homegrown culinary artisans such as Sunshine Canning’s delicious condiments. What’s more, the establishment’s walls and glassware sport vibrant designs by local talents such as Will Ralston, Steph Swift, Kim Albers, and Liz Struebing. The names may be new to you, but it’s highly likely you’ve already spied some of these artists’ work wandering about town on tattooed human canvases.

Ultimately, the Tuchmans have poured their 15 years of industry experience into architecting a craft-beer concept that aspires to a level of service taken for granted in the domains of fine wine or haute cuisine, sans snobbery.

“We are sickeningly proud of our staff,” Mark says in earnest. “All of them are prepared to answer the nerdiest of beer nerd questions. … If you want to go there, we’ll go there. But if not, we just want you to sit down and enjoy. That’s what we’re here for.”

There may be literally 99 different bottles on the wall to peruse and decide whether to take home, but in actuality, closer to 900 elements— drinkable, edible, wearable, home-brewable, and beyond— are available at 99 Bottles for any customer to enjoy.

“We don’t expect anybody to enjoy that many of them, even close to that. We hope they find the one or two that they love, and we just want to make them available the best way that we can,” Mark says. “It’s really about the idea of creating an experience, and the experience that we’ve created, we believe, is unique to each patron.”